Red radish and white radish or daikon radish are two common veggies, but do you know their difference? To put it simply, white radish has a creamier color than regular radishes.

But this is just the tip of the iceberg: there’s so much more to know about these weird and wonderful vegetables.

in this post, we will look into both red radish and white radish in detail. What are the similarities, and differences between the two radishes, their health benefits, and common ways to cook them.

Red radish is a root vegetable that is usually red in color, with a crisp texture and a spicy flavor. They are from the Brassica family and are closely related to broccoli, mustard greens, kale, cauliflower, cabbage, and turnips.

Red radishes are available year-round but are most popular during the spring and summer months. You can definitely grow radish at home, they are one of the easiest vegetables to grow.

The Taste of A Red Radish:

The taste of the red radish has been described as spicy, peppery, and hot. Most people enjoy eating the vegetable, raw or pickled. In some areas, the radish may be served with butter or sugar for added flavor.

You can also stir fry red radishes and serve with other vegetables and meats for extra flavor.

Radishes are very low in carbs, so they are a great choice if you want to monitor your sugar intake. They are rich in calcium, Potassium, Iron, Vitamin C, B6, Folate, and Manganese. (source)

Daikon or white radish can be a good substitute for red radishes. But remember they are milder in taste. If you want the hotness the red radish, scallions, mustard greens, or arugula can be better substitutes.

What Is a Daikon Radish?

White radishes are also called Daikon radish. They are usually distinctively white in color. White radish is native to Japan and is usually grown in winters.

Please note that different varieties of daikon radishes vary in size, as well as how spicy hot they are (like other members of the mustard family).

They can be anywhere between 3-12 inches long, although the most common size is about 6 inches long.

Because daikon varieties are so diverse, color can vary greatly as well. Daikon’s natural color tends to be white or cream-colored, but it can also sometimes be pinkish-white or purple.

Is Daikon a Turnip?

Sometimes people confuse daikons with turnips. Although turnips and daikons are of the same family and they look and taste (when cooked) quite the same, daikon is not a turnip, but a kind of radish.

You can use daikons or white radishes in different types of foods. Since it has a mild peppery flavor that does not overwhelm other ingredients, it is most often used as a complement to more complex flavors.

It is used similarly to carrots and parsnips as part of a winter vegetable mix or in stews, soups, and braised dishes.

You can also prepare wine, vinegar, and pickles from daikons.

And not to mention you can eat them raw, and in salads as well.

Daikon radishes are high in vitamin C and folate. It also has minerals like calcium, magnesium, copper, and potassium. –source

How To Grow Radish

Red Radish Vs White Radish (In a Nutshell):

Both white and red radish is of the same genus and species (Raphanus sativus) and is of the same family as cabbage and broccoli. Here are the major differences between the two:

Can Red Radish be an Alternative to White Radishes?

What’s a similar vegetable to daikon you may ask? Well, if you’re looking for something that can take the place of cooked daikon, then something such as turnip would be a good choice instead of red radishes.

It all depends on whether you’re using the daikon raw or cooked.

You know how daikon is a radish, and you might think that it would be simple to just substitute daikons with red radish in a recipe. But in reality, it is not that simple.

When you are eating them raw, instead of grated white radish (also known as Daikon Oroshi), a younger red radish can be a substitute. Remember the older the red radish the spicier it would be.

Radishes can be of many colors. They can be red, white, purple, black, etc. They are a cool-season crop and are one of the easiest vegetables to grow.

They can come in many shapes and sizes but the most common ones are the small red bulbs.

Radishes usually have a pungent flavor. The intensity of the flavor grows with maturity. Younger radishes have a comparatively milder taste than matured ones.

Radishes are low in calories and high in fiber. So they are great healthy snacks and help you in losing weight. Earn Free Cashback From Amazon We use affiliate links to run our site. When you buy through links on our site, we may earn an affiliate commission, without any added cost to you. Learn more One of the most important parts of potato cultivation is the hilling of the plant. Once your potato plants start… Earn Free Cashback From Amazon We use affiliate links to run our site. When you buy through links on our site, we may earn an affiliate commission, without any added cost to you. Learn more Cabbage is one of the easiest vegetables you can grow in your garden. Growing cabbage is a quite an easy job…. 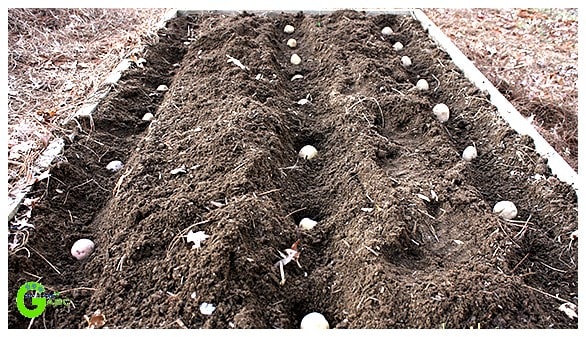 This step-by-step guide will show you how to prepare the best soil for potatoes, including the perfect soil pH for potatoes. Banana trees are not fruiting, what to do? Find out how to get your banana tree flower and fruit. Earn Free Cashback From Amazon We use affiliate links to run our site. When you buy through links on our site, we may earn an affiliate commission, without any added cost to you. Learn more Lettuce is one of the easiest vegetables you can grow. In most cases, lettuce is grown for its sweet-tasting leaves….

Earn Free Cashback From Amazon We use affiliate links to run our site. When you buy through links on our site, we may earn an affiliate commission, without any added cost to you. Learn more People often get confused between peat moss and potting soil in general. Are they the same? Is there any difference…