Cilantro, or coriander, is a very versatile herb that can be used in a variety of dishes. However, what many people don’t know is that some plants enhance their flavor while others detract from it.

The right companion plants help grow better cilantro whereas if you choose the wrong ones this can damage both of them.

Learning about which plants can grow together is a great way to organically improve your garden. So in this article, we will discuss the best and worst companion plants for your cilantro.

What is companion planting:

Companion planting is the practice of planting different types of plants together for a balanced and healthy garden.

Companion planting can be used in a variety of ways, but it generally involves grouping plants together so they can mutually benefit each other in some way.

For example, marigolds are often used as companion plants because they repel pests like aphids and spider mites.

Marigolds also help keep soil from becoming waterlogged by retaining water in their roots, which helps prevent other plants from getting too much water or drying out.

Here is the detailed guide on companion planting.

1) Companion planting can increase the quality and quantity of your harvest.

2) It can reduce the need for pesticides and fungicides.

3) Companion planting can help control pests naturally, so you don’t have to use chemical means which are harmful to you and the environment

4)Some companion plants actually improve the growth rate of other plants nearby.

The best companion plants for cilantro are those that help to deter pests and insects, add nutrients to the soil, or improve the taste and texture of the cilantro.

Peas, Beans And Other Legumes:

Cilantros love nitrogen-rich soil. But over time, the nitrogen concentration of the soil depletes drastically unless you continuously fertilize the soil.

Peas, beans, and other legumes add nitrogen to the soil. So planting cilantro near legumes will help the plant immensely.

Anise and cilantro need similar growing conditions, so you can easily plant them together. The strong smell of anise can repel aphids and fleas which will benefit the cilantro plant.

Anis seeds on the other hand tend to germinate quickly and more effectively when planted near cilantro.

Tall annual flowers like sunflowers can provide some form of shade to your cilantro during the hot summers.

If you have garlic growing near your garden beds then they won’t need as much insect control!

Cilantro as a companion plant:

Cilantro’s aromatic foliage not only makes it a staple in the kitchen but can also mask the smell of its neighbors in the garden.

Many pests rely on their sense of smell to locate their lunch. Mingling fragrant herbs like cilantro in the vegetable garden is a good way to camouflage crops from their pests.

A wealth of scientific studies have investigated the benefits of cilantro as a companion plant for many types of vegetables and found it to be a healthy addition to the veggie garden, too.

Cilantro can be a great addition to the leafy greens like spinach, collard, lettuce, etc. these plants suffer quite a lot from pests like spider mites, aphids, etc. Cilantros attract many beneficial insects which can feast on those pests.

Cilantro and potatoes are two plants that work very well together. Potatoes sometimes get infested with the Colorado potato beetles which feed on the plant.

The predatory insects that are attracted to cilantro prey on these beetles, and protect your potatoes.

An okra plant benefits from planting with cilantro because cilantro attracts beneficial insects to the garden. Okra is very prone to aphids and other harmful pests.

Carrots need rich soil with lots of nutrients for healthy growth. Carrots also help improve the flavor of cilantro so planting them together is a great idea!

Tomatoes, peppers, and eggplants all benefit from having cilantro planted near them. most plants that produce fruits are prone to pests.

Having cilantro nearby can attract predatory insects to these plants, which keeps the pest population checked.

But there is a problem with growing fruit-bearing plants like tomatoes and peppers near cilantro. These plants don’t do well in high nitrogen-rich soil which is a prerequisite for growing bountiful cilantro.

So the best option would be to plant them in separate pots and then place them nearby.

Not all plant grows well with cilantro. It is very important to know these plants and avoid them near your cilantro plant. The following list is a list of worst companions for your cilantro:

Dill can attract beneficial insects to your garden just like cilantro flowers. but the problem is this can result in cross-pollination. So if you want to save cilantro seeds for future use it will create problems.

It also inhibits the growth of cilantro by releasing allelopathic chemicals that inhibit the germination of its seeds.

Oregano and cilantro have very different watering and sunlight needs. So you can’t grow them together. It is the same reason why you can’t grow rosemary and thyme also with cilantro.

if you still want to grow them nearby plant them in different pots.

Never plant cilantro with fennel. They don’t work together. the fennel plant release a substance that can hinder the growth of your cilantro.

How do you keep a good supply of cilantro in the garden?

To keep a good supply of cilantro in the garden, sow every few weeks from mid-spring to early autumn. If you are harvesting a lot of cilantro and want to keep it growing throughout the summer, cut the stem only once the flowers have turned brown.

The plant will continue to produce new leaves on its stem until late fall.

When considering companion plants for your cilantro, keep the following in mind: garlic, peas, and basil are the three most compatible. Potatoes and tomatoes are moderately compatible. Finally, fennels and oreganos are least favorable with cilantro.

Now go and get some cilantro for your garden. This post will help you get all the necessary information for growing cilantro plants. We use affiliate links to run our site. When you buy through links on our site, we may earn an affiliate commission, without any added cost to you. Learn more Here in this article, we will give you some of the best choices for companion plants for tomatoes. As a companion plant, they provide one… 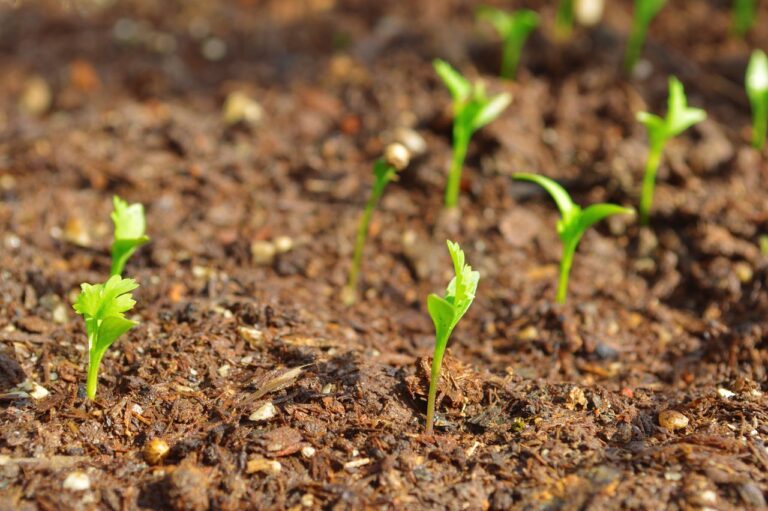 We use affiliate links to run our site. When you buy through links on our site, we may earn an affiliate commission, without any added cost to you. Learn more Cilantro is one of the easiest vegetables to grow especially if you are a beginner. You can grow cilantro in the garden as well as… We use affiliate links to run our site. When you buy through links on our site, we may earn an affiliate commission, without any added cost to you. Learn more Cilantro is a great addition to your kitchen garden. If you are buying them from the market chances are more often than not you will…

We use affiliate links to run our site. When you buy through links on our site, we may earn an affiliate commission, without any added cost to you. Learn more Cilantro is an herb that’s commonly used in Mexican, Asian and Indian cuisine. It has a distinct flavor that many people love. Not long ago,… We use affiliate links to run our site. When you buy through links on our site, we may earn an affiliate commission, without any added cost to you. Learn more Watering a Cilantro Plant Cilantro is one of the more finicky plants when it comes to proper care. Despite being easy to grow and able…